Be careful what you wish for
An Englishman's home is his castle. Or his curio if he's a treasure hunter who's spent a lifetime collecting trinkets from all four corners of the globe. Alexander Curio was a true eccentric. A legendary explorer who left no stone unturned in his search for gems and gimcracks. To him, life was a gamble, with fate to be decided on a whim or a flip of a coin. A mysterious loner who loved to raise the stakes until they could be raised no higher.
Alexander's life was one big puzzle. Only a select few ever got beyond his front door. You're about to join their exclusive ranks. At first glance, Curio looks like the home of an explorer whose passion for chasing treasures has taken him from the Thames to Timbuktu. But the clue lies in the name. Secrets lie within her seemingly innocent walls and trinkets hold the key to untold riches. Fortune favours the brave but riches come at a price.
Who is the man behind the enigma? Was his death the result of some cruel, cosmic irony? And does he really want to share the treasures hidden away within the labyrinth he calls home?
This is no ordinary home. Alexander is anything but an ordinary man. Now he's inviting you into his world. But once you enter, there's no going back
vollständige Beschreibung anzeigenausblenden

One of a kind concept for an escape room, with incredible execution and great puzzles throughout. The twist is amazing! We experienced no technical problems on our attempt.
The best room that I've completed to date. Hats off to Escapologic Nottingham!

Gespielt am: 11 Sep 2021 Teamgröße: 4
Perhaps the room was slightly overhyped by other enthusiasts and a bit poorly aged / badly ran but we left this room a bit disappointed. The core element was still pretty special and unique, but it definitely felt like it needed a revamp
Anonymous erfahren hat dies bewertet:

Great concept for an escape room and like no other we have escaped. Really enjoyed it. Some puzzles were behaving badly as we had the right idea just puzzle design letting us down. Worth a go if in Nottingham.

A great room with an original twist! One for those who have done lots of rooms

Curio is in some ways a very traditional experience, with regards to its theming and approach, but the room is elevated by Escapologic's extremely high production design, excellent puzzle design and balance, and a truly magical central conceit.

It was only the third room I ever played but our team of 4 failed having completed (according to the host) around 95% of the room, so we were able to see a lot of what makes this one special. Still one of my favourite rooms to date and highly recommended for veterans.

One of the challenges of writing reviews of escape rooms is giving a clear impression of the experience while avoiding spoilers. There are some rooms where this is particularly difficult because that means I can't talk about a core element of the room, the most memorable and unique thing about it. Curio is one such game.
What I can say about it is that it's a high quality, original and satisfying game from start to finish. There's a particular style of decor you often see in escape rooms...

The single most impressive moment I've ever experienced in an escape room combined with obvious progress, good puzzles, a beautiful set and, that most intangible of things, "flow", made this one of my all time favourite escape rooms. "

This room delivers something that you probably won't have seen anywhere else. No spoilers - a fun room with some very impressive room design and definitely one you won't forget

6.9 / 10
We head to an eccentric treasure hunters house in Nottingham which is hiding quite a few secrets. Can we escape with the riches?

Curio has a gimmick. And at some point that gimmick was probably an amazing and exciting surprise. But as with most escape rooms, as more and more customers come through the doors, the game briefing gets longer and longer to cover all the stupid stuff customers sometimes do. I won’t give away the gimmick directly, but will tell you what was said before we even started the game: we were asked if anyone had severe motion sickness or vertigo, told that if we wanted to get out of the game it could take a little bit longer than in normal games, and there was a special door that we could only go through when a green light was on, under no circumstances try and open the door when the red light was on, and the door might go to different places at different times.

A very special room – it has a completely unique element, lots of puzzles and so much variety. This is my favourite room I’ve played and it will take something very special to beat it.

This is such a unique room and going into it now little about it just makes it all the more special. Escapologic have created a fully immersive experience that is full of twists and turns. It is their hardest game to date so expect to spend some time having to really think about what comes next but it’s worth it for the pay off of what you get to experience. To really stand a chance of completing the room, you really need a minimum of three people. 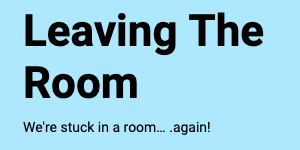 Really enjoyed the tech in this room. At some points it was a little linear, but the room was mega immersive and impressive. I thought the puzzles were really original!

We did both utopia and dystopia on the same day and they flow well together, especially the storyline!

This room is tricky to review - we got the record on this one which was nice but sadly some broken props and a slightly absent host meant we wasted time and got frustrated at something that, in reality was an easy fix. There were some "fun" puzzles in the room that made us laugh but unfortunately the poor quality and props being broken meant some puzzles weren't completed as per the room instruction and no guidance was given, made for a negative experience for us.

Our host was really nice, it was fairly evident he was unable to "fix" any issues as it was out of his remit, for which we felt sad as it has potential to be a good room if those bits could be fixed and work properly.

Based on conecpt alone this should be an excellent game, but I feel its execution left a lot to be desired. Set and theming was well done and puzzles required a strong element of teamwork, but something about the puzzles felt odd. There was nothing massively wrong with any of the puzzles, but we just didn't get on with them too well. This was especially true in the latter part of the game, where the flow became very linear and the solutions weren't particularly clear - meant a lot of twiddling padlock dials until it would open as the code wasn't very clear.

This certainly isn't a bad game and you'll have fun in here, plus is very affordable too. The ideas just need some streamlining as it felt a bit all over the place. The owner Liam was lovely and cleary has put a lot of effort into the room - Mutiny just didn't work for us I think.

We really enjoyed this room. Non-linear complete the puzzles to escape kind of rooms are my favourite (not so much my partners) but it means we can both get stuck in. Lot's to do in this room in a huge space with some cute quirky props and puzzles.

We had a ball I recommend all the games here!

It was lovely to meet Stephen the GM when we returned to this venue to play their second room, Grand Gallery Heist at the Escape Modern. He was very enthusiastic and set the scene well. We also greatly appreciated the heaters in the room on a chilly day.

We enjoyed the unique and clever puzzles but found our observation was lacking. We needed 2 extra minutes to escape with the painting but feel that if a clue hadn't fallen off the item it should have been stuck to then we would have escaped in time. We were also specially told not to remove any paintings (apart from the one we were stealing) from the walls so struggled when a puzzle required us to remove part from the wall - we didn't dare pull it hard enough as we thought it would set an alarm off.

Overall we thoroughly enjoyed this room although with the amount of puzzles involved it might be better suited to a larger team.